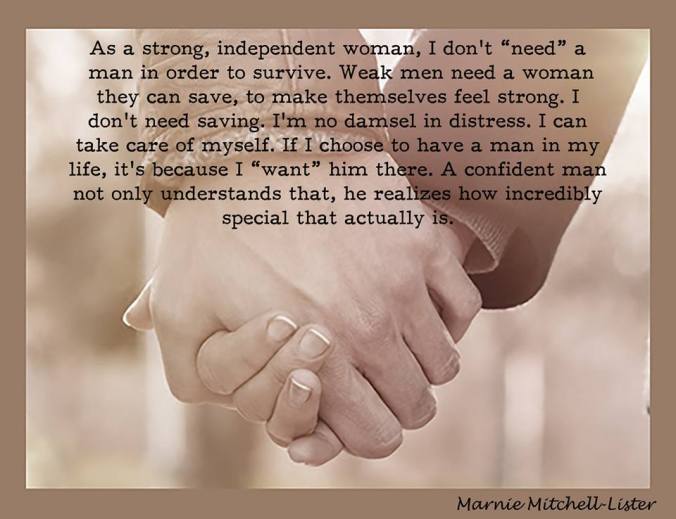 My incredibly talented cousin and writer, Marnie Mitchell-Lister, wrote this and I think it’s worth a discussion.

*A note from Anne Dennish: Please note that this article was written in the context of men and women, yet it is meant for all relationships.

I can speak from experience about this subject, and from the heartache it causes.

I’ve been told I’m a “strong” woman, which I would say is true. I’ve handled divorce, raised five children, survived breast cancer and handled a million other responsibilities at one time. Although to me, being a strong woman is much more than what you handle; it’s HOW you handle it. And I’ve never NEEDED a man in my life to handle any of it for me, but I had always WANTED a confident man in my life.

A few years ago I started asking men of all ages this question: do you want a relationship with a strong woman or a weak woman? While their responses may have been slightly different, the answers were all the same.

They told me that as far as dating, they want a “weak” woman because she makes him feel important; she makes him feel needed; she feeds his ego to levels beyond belief; and that it makes them feel more powerful and stronger to know that a weak woman is in their “control.”

In other words, weak women turned them into strong men.

Yet strangely, there was another piece to their answers. They said that while a “weak” woman was great for their ego and self-esteem, in the end they wanted to settle down with a “strong” woman. One who didn’t “need” them but “wanted” them; one that wasn’t always whining and asking them to do everything for them; one who challenged them and made them want to be a better man.

Confused? I sure was at the time, but it all made sense.

A confident man doesn’t need a “weak” woman; they need a “strong” one to keep them in balance. After a terrible day at work they want to come home to a woman who understands and makes their night better than their day (a weak woman would expect them to do that for them); they want a woman who can have a conversation with them that isn’t all about them (a weak woman would sit with gazing eyes at them, hanging on every word as they talked about themselves and not her); they want a woman with a life of her own, a passion, a career, a life purpose that they can share in(a weak woman has none of that except for him).

A confident man wants to be called out and held accountable by a strong woman, because they know they’ll be honest enough to do it (a weak woman will tell the man that he’s perfect); they want a woman will engage with him on occasion in meaningful conversation (a weak woman has nothing important to say); and he wants a woman who knows what love is, knows her truth, and doesn’t settle for less than she deserves (a weak woman will take whatever she can get.)

A confident man knows how to treat a strong woman; he knows her worth and value; he knows her heart, mind and soul; he takes the time to listen to her and understand; he’s sure to always let her know how important she is to him.

A confident man will know that he’s blessed and lucky to have a strong woman loving him, supporting him, and caring for him. He’ll know that he can always count on her, no matter what. He’ll always let her know how important she is; how loved she is, and how “wanted” she is.

A confident man won’t “need” a strong woman; he’ll “want” one, at least if he’s smart he will.

Healthy relationships are built on two strong people who love each other and know how blessed they are to have one another. They are sustained on feeling gratitude for each other on a daily basis. They are kept moving forward by keeping the love alive.

Yes, it was an interesting response of answers I received from men, young and old, but I guess in the grand scheme of settling into a long term relationship or a marriage that will last a lifetime, the song remains the same: the confident man wants a strong woman.

And the strong woman wants a confident man.

“A confident man not only understands that, he realizes how incredibly special that actually is.”  ~Marnie Mitchell-Lister~

As I sit here this morning watching the sun rise, I’m filled with an overwhelming feeling of love and gratitude. How did I get here? When did this all happen? Questions flowing through my mind, yet deep inside, I know the answer: I got here when I loved myself the way I wanted to be loved, and it happened on a snowy night last February. It happened when I met Rob.

We were two broken souls who found one another. Both of us believe that the ones’ we loved most that passed away conspired to get us together…and I believe that’s true. It wasn’t love at first sight, but it was love. And how do I know this? Because out of our relationship came some amazing things!

Perhaps the key to knowing the “right love” is paying attention to what your life together becomes and what it has brought you. Through our love he’s found a job he loves and strained relationships he had in the past became a smooth ride. I found more stories to write for “Waking Up” and found myself part of a family that I would have never imagined I’d be part of.

I found a close friendship with the mother of his children, one that isn’t built on his prior relationship with her, but on “our” relationship as two women who love and respect one

another. I found myself part of her family as well, and while most think that’s crazy, I think it’s beautiful…and so does he. I found love in his children and in the laughter and love of his granddaughter, and he found that in mine.

After all these years, I truly understand what love is, and I found it for the first and last time in my life. I found it on that snowy night over a year ago, and with each day that passes, I sit in gratitude of what this love has brought into our lives and the lives of those around us.

“It’s funny that the moment you stop looking for something is the very moment you find it.”

Believe in love and believe in yourself. If you can do this, the rest will fall into place…it always does!

Sometimes it’s tough being a “girl.” Whether you’re a young girl or older one, we still have those moments in which even WE’RE surprised at our reactions to certain situations. I consider myself to be a strong woman, yet I’ll admit, there are times that the strength goes out the window and my “girl” moment comes flying in. It could be about feeling jealous, a comment that hurt my feelings, or because I was simply tired of being so strong.The truth is, sometimes I want my very own “girl moment!”

The moments aren’t always received well by the person on the other end, which sadly, is usually a man! Yet, as women, we need to embrace our “girl” moments, and honor the “girl” within us!

“You need to balance the strong woman with the girl tucked deep inside from another time in your life. Accept her, embrace her, and love her, because it was that “girl” that was instrumental in making you the strong woman you are today.”

“Love her insecurities, her tears, her fears and be grateful for the lessons that all of that taught you. She was there when you needed to find the strength in your time of weakness. She let you cry silently to yourself when you were hurt, and let you feel afraid when the darkness overshadowed the light. She grew up and along side of you, and the woman you are now is the woman that is ever changing to become the woman you long to be.”

Be proud of the strong woman you are, because that strength will help you through the rough roads of your life journey, yet take the time to be gentle with that “girl” inside of you; she’s the reason your became the woman you are.