This morning I woke up to blue skies and bright sunshine, which is a day far and few between here at the Jersey lately!

I grabbed my coffee and headed outside to take it all in. It’s in those quiet moments that I think to myself how much I love my life and how many blessings I truly have to count.

And I remembered that the more I love my life, the more it loves me back!

Love your life, my friends, and let it love you back.

It’s filled with endless possibilities, miracles and all the love you can imagine!

I believe in positive affirmations; trying to always see the positive rather than focusing on the negative. I know the power of words and the wrong words, or negative words, can have a strong impact on you and the person you say them to.

Listen, no one is perfect, least of all me, but I would rather lift someone up with positive words than bring them down by telling them their faults. In fact, if you want to see someone change into the awesome person they truly are, speak kindly to them, tell them their strengths, share how you feel about them with them, and focus on the good things about them, not the negative.

Our imperfections make us beautiful. Our flaws make us flavorful. Our quirks make us memorable.

I’ve raised five children and if you think there haven’t been things they’ve done that bother me, well, you’re kidding yourself. I love them with all my heart and for who they are, yet I would rather tell them what I love about them and what their strengths are rather than tell them their faults, such as “you left the wet towel on the floor again, why don’t you put the cap on the toothpaste and…” and so on.

And as the children have grown as well as myself, I pick my battles. I try and lift everyone in my life up; I try never to pick at the small things because there are so many more big and wonderful things about them. Sometimes it’s those silly things that bother us that we’ll miss one day.

If you continually point out someone’s faults to them, I can promise you they’re going to shut down because what you’re telling them is that you don’t accept them for who they are; that all you see is their faults; that you say you love them but they won’t feel it because all you do is pick at what you don’t like about them rather than telling them what you do.

If you’re consistently looking for perfection from the people in your tribe then you’ll be disappointed. If you can’t see more good than bad in the people you surround yourself with then leave them.

Ask yourself this: how would you feel if the people you love were constantly picking at you and expressing the negative things about you? Would you begin to shut down? Would you stop caring? Would you feel as badly as they were making you feel?

It’s simple: treat the people in your life the way you want to be treated.

Pick your battles; accept the people you love for who they are, not who you want them to be; and lift them up with positive words because the negative words you speak to them will bring them down and will only hurt you as well in the end.

See the good and stop seeing the bad.

Every day you wake up is a good day, and all the emotions you feel throughout it are a gift…a gift of life lessons; a gift to learn more about yourself; a gift to see your life as it truly is.

The “down days” happen to remind us how many more “good days” we truly have to count, and they remind us that it won’t be like that forever, just for that day.

Embrace every day, good or bad; embrace your emotions, happy or sad; embrace the lessons you’re being taught.

No one’s feelings are ever wrong, they just “are.” Sometimes there are reasons for the down days, sometimes there’s not. And that’s okay. We’re all human. Just be sure you don’t sit in those down days for long. Feel them, cry through them and let it all out…tears are cleansing our soul of all that we hold inside, and there’s nothing wrong with that…in fact, tears are our release, whether in sadness or in joy.

Feel what you have to feel and take those down days, be grateful for their lessons, then release them, let them go, and move forward into the new day ahead. 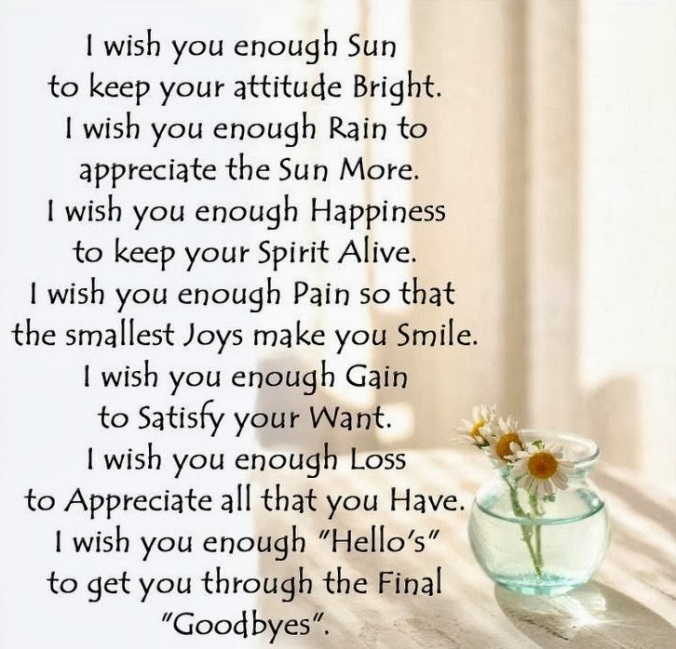 I’ve always loved the author, Elizabeth Gilbert. I’ve read most of what she’s written yet I have to say that her one book, which turned into a movie starring Julia Roberts, was my favorite, and that was the infamou “Eat, Pray, Love.” It’s a true story of her life at that point in her journey and one that I learned many life lessons from.

Another book she wrote, “Big Magic” is my second favorite because, as a writer, I understand all that she speaks of and writes about.

So when the opportunity came up a few weeks ago to see her speak in person, I jumped at the chance.

As a writer, I’ve always wanted to meet her and share my own books with her, but 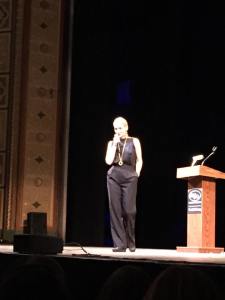 opportunities to do that are far and few in between. I’ve held onto the thought, actually, “the dream” of meeting her one day, and I’ve held that dream for many, many years.

As a spiritual person I knew that if my meeting her was meant to happen, it would, and it would happen as it should, how it should and when it would. So it was no surprise that in February a post from Count Basie Theater in Red Bank, New Jersey appeared on my Facebook newsfeed: Elizabeth Gilbert would be speaking there. I knew I needed to get tickets and if that wasn’t enough, the event was being held  on my birthday! It was at moment that I knew the Universe had set this dream of mine up to become a reality…my patience and continued belief that I would meet her someday was paying off.

I proceeded directly to “purchase tickets” and much to my surprise and excitement found that I could buy tickets which also allowed a “meet and greet” with Liz. My head was spinning and my heart skipping beats as I realized that this dream of mine was coming true…that I would finally get to meet one of my “hero’s” of literature. I purchased the tickets and sat with the biggest grin on my face for the rest of the night…actually for everyday that was one day closer to that night.

As the time was quickly approaching I was beginning to get a bit nervous, after all, 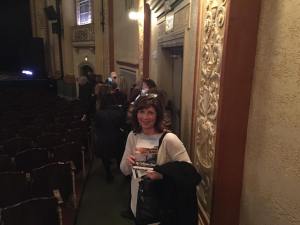 meeting a “hero” can either be wonderful or a shot in the arm. What we perceive people to be through their books and social media does not always ring true when you meet them. I hoped upon hope that she would be everything I had imagined…

And she was…and she was more than I had imagined.

My love and I were about fifth in line to meet her. I knew she wasn’t signing any of her books that night, but had hoped she would accept my two books as my birthday gift to her!

Her staff took my coat and pocketbook, as well as my cell phone so that they could take pictures.  My heart was racing as I walked toward her. It was such a surreal moment of seeing her and walking towards this woman whose books had changed my life. As I approached her,  she smiled, said “hello,” and embraced me in a hug, one filled with all the love and light she is…and with an incredible amount of energy! 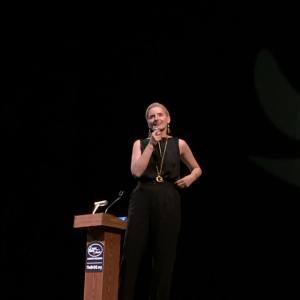 She spent about five minutes speaking with me and graciously accepted my books. I told her that it was my birthday, to which she wished me a wonderful one, and that I had just reached my four year breast cancer survivor date. I offered my condolences over the loss of her wife, Rayya, and told her how much she meant to me. She took the time to pose for several pictures with me and I was on my way.

I was in heaven…on Cloud Nine, if you will. And so was every other person that had the chance to meet her that night.

It was time for her to speak so we took our seats in the fourth row. I snapped picture 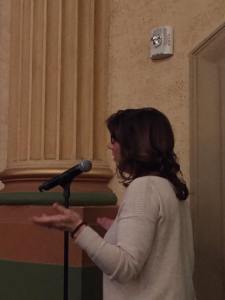 after picture and hung onto every profound word she spoke. Meeting her was a dream come true, yet I had one more opportunity to speak “one on one” from the audience with Liz. She had time for a few questions and I was right up in line in front of a microphone asking her mine. I felt as though it was a private conversation between the two of us, even though there was an entired audience sharing in it!

It was truly the most perfect birthday I’ve ever had, and that energy, that feeling of my dream coming into a reality lasted well past that night…once again an experience with Elizabeth Gilbert changed me a bit, put a few things in a different perspective, and made me want to be as good a writer as she is and be able to touch a life and the world in the laid back, easy going, and honest way that she does.

So if you were to ask me what she was like I would tell you this: She was beautiful, humble, kind, compassionate, honest, down to earth, sweet, warm, loving and an amazing human being to be in the presence of.

Thank you, Elizabeth Gilbert, for being all that I had hoped and more; for putting the real you out there for the world to see, not some facade of what the world wants you to be; and for embracing me, speaking with me, and accepting my two books that I’ve written, and two books which carry a lot of lessons I’ve learned from you.

It was my honor, my privilege, and my dream turned into a reality to meet you.

And that is my experience on meeting Elizabeth Gilbert.

It was one I will never forget. 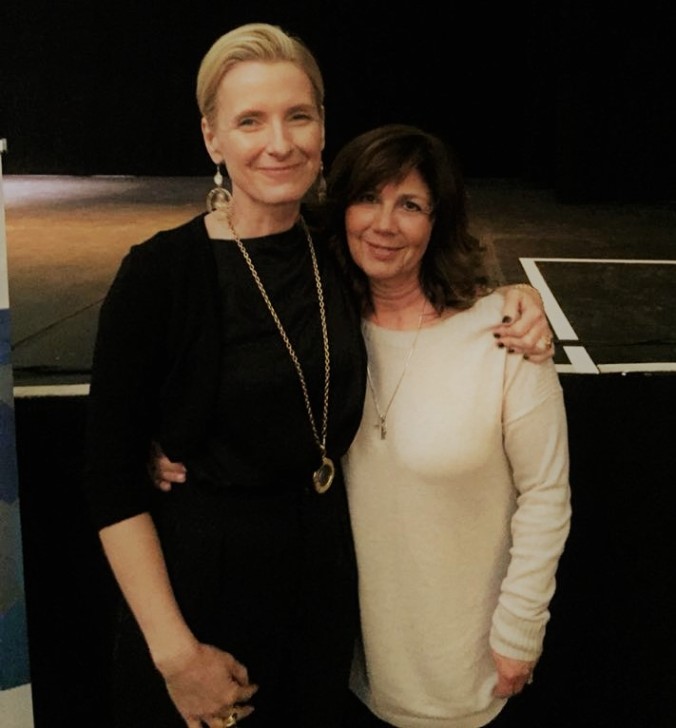 This “cat and mouse” game is also a form of abuse…know the signs of a controlling person and distance yourself from them. It’s the healthiest thing you can do for yourself and those that you love.

*On a personal note: I’m not an expert on this subject, but I’ve been in this situation before and know the signs of it happening, which is why I’m writing about it now. Every so often I see someone I care about being controlled by the wrong person and I watch as they become submissive to them. I can only share my personal experience with them to try and help them see the unhealthy situation they’ve allowed themselves to be in, yet as always, it’s a life lesson for them. I can’t fix them, save them, or change their situation…only they can do that. It’s a lesson they need to learn, just as I had many years ago, and all I can do is offer my support and share my experience with them. ~Anne Dennish~