The world remembered September 11th yesterday and today we can take a breath and remember the world united on September 12th.

Today is a new day, so let’s make it count.

Spread kindness wherever you go, smile at a stranger, and find gratitude in your life at this very moment.

Go out and mark your mark in life and make a difference in the life of another.

“What’s” happened to you in your life isn’t as important as “why” it happened. ~AD~

We all experience some difficult situations in our life and I’ve come to accept and understand that the “what” that’s happened to me isn’t as important as  the“why” that it did.

We’re so quick to blame others for our difficult times, yet we have a hand in those situations as well. Perhaps we aren’t being our authentic self or standing in our truth to those around us. Maybe we change “who” we are according to the people we are around at a particular moment. I can tell you that I’ve learned that I am in control of what I allow to happen to me and it’s up to me to set healthy boundaries for my highest good…and it’s not always easy to do.

I had breast cancer and it can’t always be prevented, yet I could have had a mammogram sooner than I had; I went 5 years without one and only had one done when I found my tumor. So while this “what” may have been destined to happen to me, the “why” it happened when it did was because I wasn’t loving myself enough to get that mammogram every year like I should have. I know better now.

I’ve lived through divorce and a bad relationship. The “what” that caused an ending to these relationships isn’t as important as the “why” it happened. It happened because I was allowing those people to treat me in a way I didn’t deserve. What you allow will continue and it did for me until I realized I deserved better and decided to stop it.

And I’ve lived through emotional, verbal and physical abuse. It went on for years until I finally put an end to it. “What” was said and done to me isn’t as important as “why” it was done to me. It happened because I let it happen. I wasn’t as strong as I am now, my self-esteem was non-existent, and I blamed myself for causing all those things that were said and done to me then. I was at the bottom and when I finally decided that enough was enough, I pulled myself up off the floor and began to see clearly of the “why” it happened. I began to get stronger day by day and set up boundaries that were never again to be crossed by anyone, and if they were, I certainly recognized it sooner. It happened because I let it, not because I deserved it. It was yet another life lesson for me to learn.

You have to love yourself, respect yourself, and know that you don’t deserve to be treated badly by anyone, especially by yourself. Let’s face it, we’re all masters of self-sabotage at times…we can hurt ourselves better than the person who is hurting us. Yet that’s not the way it should be; you know that as well as I do.

It’s time we all, myself included, stop focusing on the “what” that happened to us and start looking deep within ourselves to see our truth of the“why” it happened.

It’s then that we learn and grow and move forward into the life we want and deserve.

If you want love you have to love.

If you want honesty you have to be truthful.

If you want loyalty you have to be loyal.

If you want happiness you have to be happy.

If you want compassion you have to be compassionate.

And if you want kindness you have to be kind.

We all want the people in our life to be these things but in order to have that YOU have to be those things because it all begins with YOU!

Sometimes the Universe is hard at work opening doors for us that we never knew needed opening and more often than not, we don’t even realize it.

A few days ago as I sat with my morning coffee I realized it. Suddenly I began to think of all the things that have happened in my busy life in the last week or two and could see what was happening: the Universe was opening doors for me. It was offering me opportunities which I hadn’t even asked for and putting like-minded people in my path.

We all get so busy with day to day life that we forget to pay attention to what’s going on around us. We miss opportunities; we’re blind to the signs; and we run on adrenaline instead of intuition.

And I could see that so clearly on that particular morning.

All of a sudden I remembered that everything happens as it should, how it should and when it should and on that morning I could see all the gifts that were showing up in my life, all the doors that were opening, all the opportunities being given to me.

And I know that doors don’t always open when we need them to and I’m certainly not going to take these doors for granted.

I’m taking yet another leap of faith and allowing all these open doors to lead me to where I need to be…to where I’m supposed to be.

And I’m incredibly grateful to the Universe for paying attention to ME!

Pay attention to the signs that are all around you, my friends.

There are some cruel people in this world. They are the ones that judge you, point the finger at you, tell you what’s wrong with you and are verbally abusive. It doesn’t matter if it’s someone you know or a stranger: it’s wrong.

Yet all too often it happens without warning and without reason, although there is a reason people are cruel: it’s them projecting their own fears and insecurities onto you. And it’s wrong, it’s hurtful, and it’s abusive.

My son was the target of a stranger in a convenience store yelling obscenities at him and saying some downright disgusting comments to him. As a mother, it infuriated me and I wish I had been there when it happened. On the other hand, had it not been my child I still would have been infuriated because no one has the right to speak to another human being that way.

I’ve been on the other end of verbal abuse more times than I can count, yet there’s one thing I’ve learned and I want to share with you: those people are projecting their fears and insecurities onto me.

They see in someone else what they can’t see in themselves and want desperately to see or be.

They see strength in someone else that they wish they had, but they don’t because they don’t know how to be strong.

They see an open minded person living a happy life, being who they are, and wish they could be that person, but they can’t because they’re afraid to.

They’re afraid to be who they want to be and have the life they want to have because they fear people just like them judging them and verbally abusing and harassing them.

Those cruel people have low self-esteem, fear, and insecurities beyond belief.

They don’t know how to be any other way than cruel, and they don’t want to try and be any different. They make the choice to be judgmental and mean, and the rest of us suffer because of their ignorance.

I know all of this to be true but I will admit my heart always breaks a bit when someone is nasty and cruel to me or my loved ones.

But I also have to remember that it’s not me they’re actually judging…they are judging themselves and taking it out on me.

Be kind, my friends, for you never know the what the journey of another human being is like.

Ignore those cruel people and know they are the ones with the problems, not you.

Don’t be one of them.

Like Loading...
It’s so very important to pay attention to what surrounds us in our day to day life. There is so much beauty on this journey that we sometimes get caught up in the day to day routines, whether it be a job, or taking care of the kids, or housework and bills. Yet it’s because of all those things that it’s so important to take some time throughout the day to look around and look up.

I find beauty not just within my house, but outside as well. In fact, spending time outside is what slows me down and helps me to find my balance.

When I’m outside I look around at the flowers that are blooming all around me and our beautiful vegetable garden. During the early hours of the night I sit outside in awe at the show of incredible lights flooding our backyard with fireflies.

I look up to the sky during the day to see a beautiful blue sky or one filled with puffy clouds. I see the sunrise and the sunset. I look up to my incredible “magic tree” that provides me with shade during the day.

You see, life is filled with beauty and it’s up to you and to me to take the time to see it. 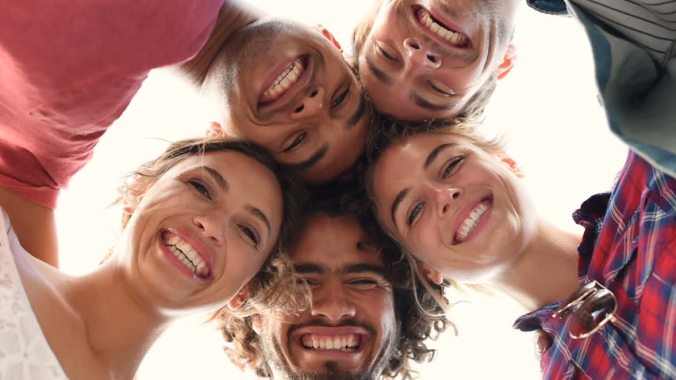 I’ve learned that no matter what kind of day someone is having you can help change that moment when you smile at them, because they’ll smile back. In fact, most people become “helpless when you smile,” but helpless in a good way: they see your smile, they feel your positive energy behind it, and they share in your happiness. They begin to let go of their bad day and become helpless at staying in that bad place; they’re helpless when you smile.

Make an effort to share your positive energy with someone who needs it.

Make someone “helpless when you smile” today.

Wishing you love, light, and smiles, 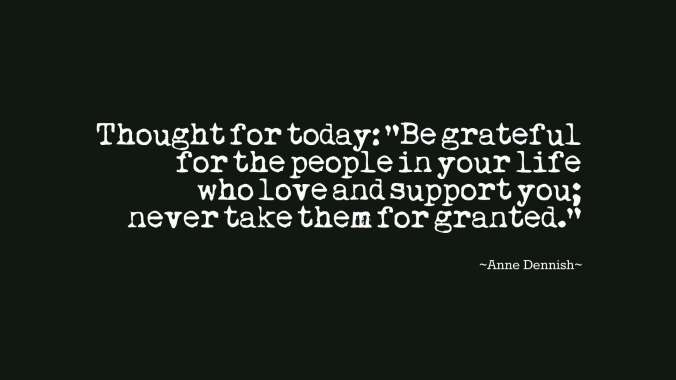 Life changes in the blink of an eye and what we have one day can be gone tomorrow. So often we allow life to get so busy that we forget to see what’s right in front us: the people who love us.

We know in our hearts that we’re grateful for them, yet so often that gratitude is put on the back burner and the ones we love are left feeling “taken for granted.” We all need love in one form or another, whether it’s from your family or children, friends or a significant other.

“Love lifts us up when life tries to pull us down.”

Take a look at your life at this very moment and count your blessings. Be grateful for the people in it that love and support you and for the life you are gifted to live every day.

Don’t let the world and all the sadness and craziness in it cloud the beauty in your life. Live your life everyday in gratitude for the people in your life, for the job you love, for the career you are pursuing. Be grateful for another new day in your life; another day in which you can share your love and gratitude with others.